skip to main | skip to sidebar

Vesuvio in the New York Times

Vesuvio was recently mentioned in the New York Times. Here is our part, and if you’d like to read the whole article:

Travel
December 1, 2010
A Book Lover’s San Francisco
....Rather than sit there, I bought the book and went across the lane (Jack Kerouac Lane, to be precise) to the Vesuvio Cafe, a bar that was once a Beat hangout. Vesuvio is a cozy space of dark wood, tiled floors and stained glass, with framed photos of the neighborhood greats — Kerouac, Ginsberg, Ferlinghetti — covering the walls. I ordered a shot and a beer, which seemed an apt Beat lunch, and went upstairs to the narrow mezzanine to read.
“Visions! omens! hallucinations! miracles! ecstasies! gone down the American river!”
I paused for a sip of whiskey and looked out the window, down onto Jack Kerouac Lane, where a steady stream of well-scrubbed tourists stopped to pose next to a mural and read some of the more innocuous Beat verse that had been inlaid in the sidewalk.
A couple at a table behind me were discussing Neal Cassady’s role as connective tissue between the Beats and the Merry Pranksters. At a small table in the corner, light streaming in the open window next to him, a bearded, bespectacled man sat hunched over a book with the intensity of a monk, an empty glass and a stack of new books beside him.
Looking up, he announced that he was reading Henry Miller’s “Tropic of Cancer” in a single sitting. “I’m reading my way out of a breakup,” he explained. “I read books in cafes, then leave them behind when I’m done.”
Posted by Vesuvio Cafe at 12:05 PM No comments:

According to Wikipedia, TripAdvisor.com is a travel information website, covering more than 30,000 destinations worldwide. With more than 15 million reviews and opinions and nearly 30 million unique visitors a month, TripAdvisor is also the largest travel community on the web.

So, with that in mind, imagine our surprise to see Vesuvio mentioned (in conjuction with San Francisco as a whole) as one of the top ten literary destinations in the world.

Here's what they had to say:

8. SAN FRANCISCO - Kerouac moved here from New York as did poet Allen Ginsberg. A traveller said: "Have a beer at the Vesuvio Cafe and you might be sitting where Kerouac sat."

Thanks, TripAdvisor.
Literary hotspots, courtesy of GMTV
Posted by Vesuvio Cafe at 6:17 PM No comments:

Top 10 Bars in the World, The Guardian.co.uk

The Guardian.co.uk considers us to be one of the ten best bars in the world.

"Next door to the most famous bookshop in the world (City Lights), Vesuvio was a favourite Beat hangout. It could easily have turned into a tacky tourist trap but instead it’s retained its bohemian vibe and still hosts poetry readings and Art in the Alley events (that’s Jack Kerouac Alley, which runs between the bar and the bookshop). If you were feeling pretentious you could pick up a book next door and come in here to read, surrounded by photos of Kerouac, Dylan Thomas and Ginsberg. Or you could just get stuck into the drinks. A new menu of organic wines, beers and spirits, including Square One, a rye vodka that comes in a recycled-glass bottle, means you’ll wake up with an eco-friendly hangover."

Wow, out "of all the gin joints, in all the towns, in all the world", we feel pretty special to have been bestowed such an honor.

Guardian.co.uk
Posted by Vesuvio Cafe at 6:42 PM No comments: 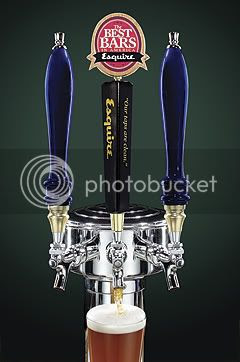 We were honored and thrilled to be named one of America's best bars by Esquire magazine. Here's what they had to say about us:

Vesuvio
San Francisco
You're having: A pint of Anchor Steam.
No matter how many tourists drop in for a pint or one of the bar's rudimentary mixed drinks, it still feels as though it's full of locals. The gallery upstairs is a particularly fine place to spend the day thrashing out what it all means.

We here at Vesuvio would like to send many thanks to the SF Guardian for recognizing our Art in the Alley event as one of the "Best of the Bay", here's what they had to say:

"North Beach has come a long way since the days when Lawrence Ferlinghetti et al. drank gallons of cheap red wine at Caffe Trieste. Though it's now more frat boy than the best minds of a generation starving, hysterical, and naked, North Beach does sometimes remember its poetic beat heritage. For a weekend each May, Kerouac Alley — recently repaved with cobblestones and stone tablets engraved with quotes by Western and Chinese poets — is home to dozens of emerging and established artists showcasing their recent work in the open air for Art in the Alley. Live music, painting, poetry, and sculpture bring back the creative bohemian buzz that enveloped North Beach before the blonde beer haze did, and the art is always on display at fab sponsor Vesuvio bar for a couple of weeks before the festival. Perhaps best of all, at the end of the alley is surreal karaoke bar Bow Bow's, where bartender Mama Candy serves a mean Tokyo Tea. After some heady art and a couple of those, you'll be shouting lines from Howl yourself."